This page is dedicated to Sonequa Martin-Green, the first woman of color to play the lead in a Star Trek Franchise. Each month I will explore things about the fascinating character they call Michael Burnham.

Question, should Michael Burnham have a love interest? Some say it’s distracting. I say why not? The thing is, it would be hard to find a love interest from Earth while roaming the cosmos. But, what if a tall handsome man brought unconditional love to you…having no judgments after you’ve been stripped of rank, convicted of mutiny and serving a lifetime mining Dilithium Chrystals? ( I’m thinking something equivalent to  black coal mining on Earth back in the day )

She made the right choice, but true love doesn’t last, at least on DISCO. Let’s get some background on her Bo. (Shazad Latif) 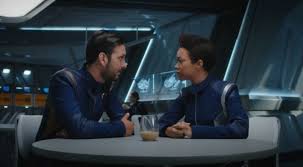 Ash Tyler – a human male Starfleet officer with the rank of Lieutenant, raised by his mother. She was a third-grade teacher at Issaquah Elementary, outside of Seattle Washington. Before attending Starfleet Academy, Tyler owned a lake house near Lake Shasta in California. Wow! Damn good catch ladies! 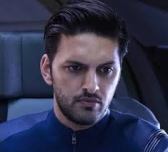 Ash is a perfect match for Michael. If you’re not sure, check her Bio in my post, Noteworthy Black Trek Characters.

But alas, the romance was short-lived. We find out later that Ash, a prisoner of war, captured during the battle at the binary stars, had his DNA and mind reconstructed. He was turned into a sleeper cell agent as part of a plan to infiltrate the starship USS Discovery. Upon awakening,  Ash attempted to kill Michael Burnham.

Can the romance be salvaged? For now, no. When looking into Ash Tyler’s eyes, Michael only see’s the murdering sleeper agent named Voq.

Sorry to say Michael broke off the relationship with Ash. The memories of betrayal were too great. Will they get together in the next season? Only time will tell.

More about Ash on Memory Alpha: