Where Did That Idea Come From?

More than once I’ve been asked how I got an idea for a story. Sometimes an idea comes in a flash and I completely write it out. (Pantsing) Most of the time ideas come to me in bits and pieces. (Plot) This post will answer the HOW part of my idea process and mention the person or thing that inspired the story.

My flash humor called Yum-Yum Vampire Hunter was published in The World Of Myth Magazine in October 2019. The idea for the story came from Kerry Anne King‘s live FaceBook writing prompt story creation which I participated in last summer. 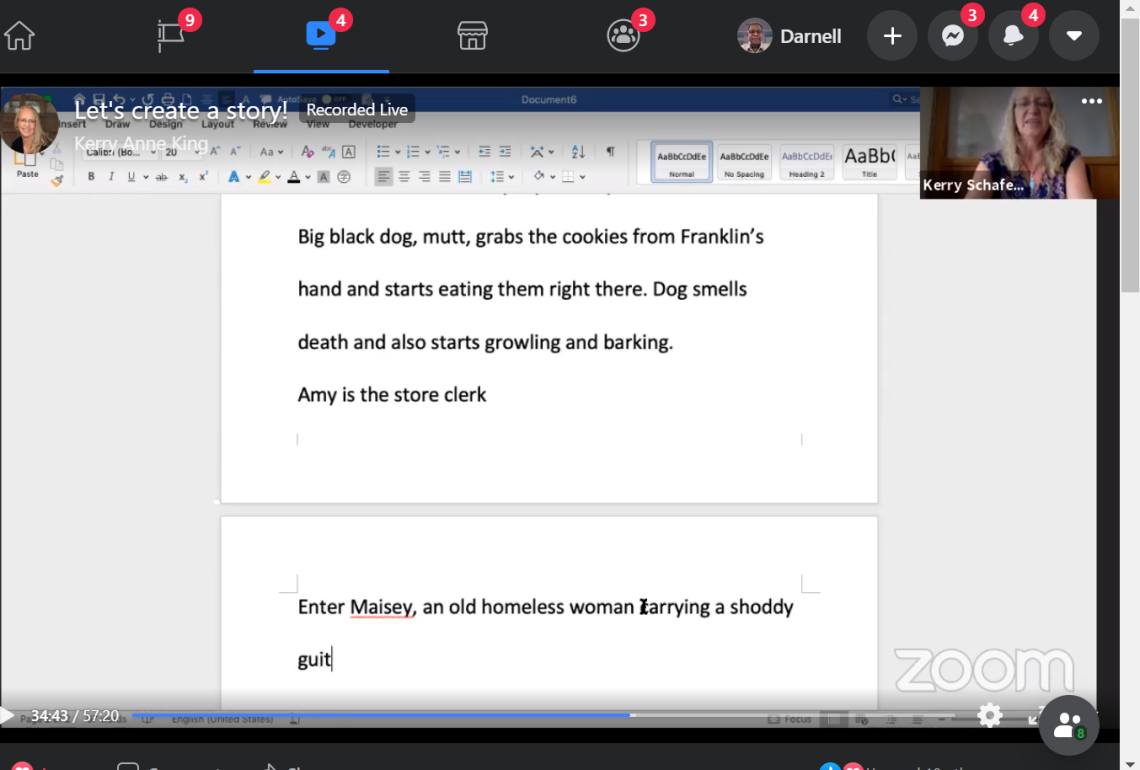 Viewers came up with a cast of characters in a store that had dialog with a vampire. The writing prompt was so much fun that I decided to create my own version of the story with additional characters and put them in a store specializing in fresh baked cookies. In comes a vampire with a craving for blood…and chocolate chip cookies. The dog in my story was a Golden Retriever named Yum-Yum. In the story, Yum-Yum was supposed to attack the vampire on command: “Yum-Yum, Eat’em Up!” Instead of going for the vampire, the dog goes for the cookies.

That idea came from an episode of the 1933 TV comedy series “Little Rascals.” Our gang of adorable children meet an aborigine man that craves candy. He doesn’t speak English except for Yum, Yum Eat’em Up, a phrase he declares loudly when he wants candy. He sees the kids have lots of candy. They take off running because they think he wants to eat them instead of their candy! I remembered that episode and decided my dog would have that name and a desire for cookies.

If writer’s block starts to take hold like Covid-19, remember that ideas come from many places as this story did. Think about a day at work, home, or in the park. Writing prompt ideas taken from the real world can be anything. You can get an idea of how to move that old story or start a fresh one… if you try.

I felt after I wrote the Yum-Yum story it was done, a one-off, time to move on. But Stephanie (Lupa) Bardy -Author, Editor in Chief @ The World Of Myth Magazine emailed me and asked “when do I get the next installment?”

I was overjoyed that she wanted more content from me! That encouragement got me writing another Yum-Yum story.

At times you may not have faith in yourself, but that doesn’t mean other people feel the same way.  With her encouragement, I wrote a sequel “Yum-Yum Meets A Tasmanian Devil.” published in January 2020

When reading characters in a story, everyone has their favorites. Writers have their favorites too. For the Yum-Yum stories, my favorite character is Maisey. She is a Black middle-aged homeless woman that plays the ukulele in the park for tips. She is known for her bravery, sissy language, and funny comebacks in conversation. Her personality was developed as I wrote her. During rewrites, more personal quirks came to me. One thing that comes to mind is if she folds her arms against her chest… she is angry. Watch out!

That idea came during a Yum-Yum rewrite, which stresses the importance of finishing a story, then rewriting to make it better.

My motto is:  A Rewrite Turns It Bright!

I hope my blog, Fictionista, encourages you as a writer to look for and use writing ideas from every source. Boldly bring to life your world-building and story descriptions. If you want to know how I got the idea for any of my other stories, let me know. Feedback will encourage more posting.     Happy Writing!

One thought on “Where Did That Idea Come From?”