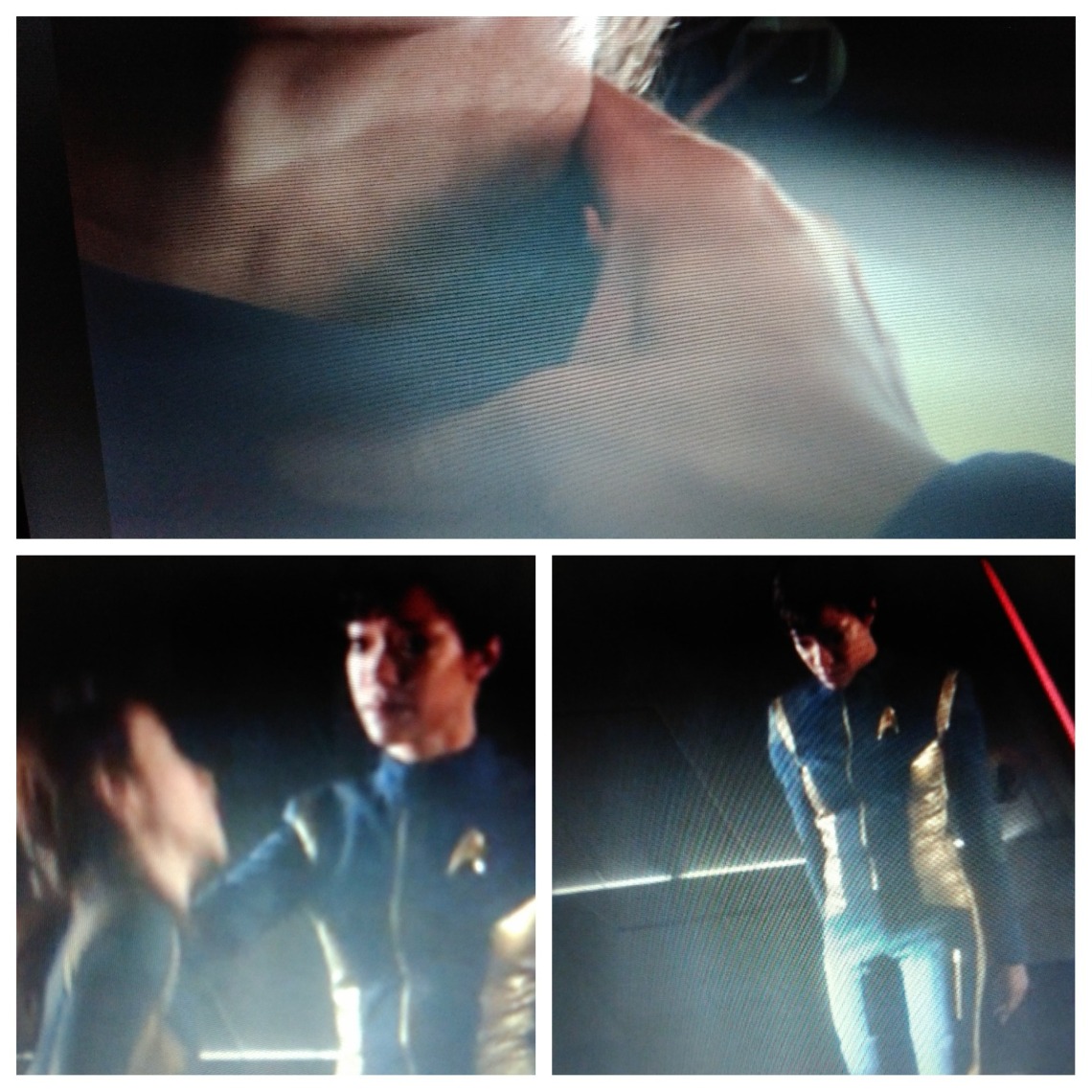 This page is dedicated to Sonequa Martin-Green, the first woman of color to play the lead in a Star Trek Franchise. Each month I will explore things about the fascinating character they call Michael Burnham.

Michael Burnham uses Star Treks classic Vulcan Nerve Pinch in the first episode of Discovery. She may not be the first woman to use the technique, but she is the first lead woman of color to use it effectively.

In the pilot episode of Discovery, First Officer Michael Burnham (Sonequa Martin – Green) encounters and destroys a Klingon  secret cell, accidentally bringing her ship, the USS Shenzou, into conflict with a warlike race. All of their ships converge on the scene at the same time, bringing the collective Klingon 24 Houses together for the first time in years. Burnham receives advice from her Vulcan foster father Sarek (James Frain) that a first strike of force is appropriate.

Deciding on action, Burnham demands…not ask,  that Captain Georgiou (Michelle Yeoh) fire preemptively on the Klingon vessel. Georgiou is unwilling to do so, stating “The Federation does not strike first.”Unhappy with Burnham undermining her in front of the crew, Captain Georgiou takes her to her quarters to rip Burnham a new one and remind her of her place in the chain of command.

This is a very tense situation. We have a seasoned Captain with many years of experience, and years of combat. Her ship could be the one that takes the Federation into a world war. Who wants that? From Georgiou’s perspective, standing down, not taking any action, would be the safest thing to do. Her mindset was to get out of the situation and return to a quiet life of patrolling her quadrant, waiting for retirement, or promotion to Admiral.

First Officer Burnham, on the other hand, see’s standing down a play that would ensure death. These Klingon’s are savages. They do not take prisoners. They eat their prey. The only outcome in this scenario will be death for all. But how does a young officer, armed with Klingon war history in her mind via Sarek’s katra, convince her captain that striking FIRST is the logical thing to do?

That’s when it happens. Burnham seems to calm down, see Georgiou’s point about holding fire and  returning to her station – then, faster than a pissed off cobra, she grips Georgiou by the shoulder, nerve pinching her to the ground and running off to the bridge to take control. She has decided this was the only way to save her captain, the ship, and herself.

It’s a gut-wrenching moment. Open mutiny is something rarely seen in Star Trek protagonists. In fact, as later episodes reveal, Michael Burnham has been branded the Federation’s first mutineer. I believe that is in reference to the first mutiny since peace time. Also, because of the familiarity of the action, her use of something so recognizable (the pinch) for such an unspeakable act. It’s almost a perversion of the heroic use of the nerve pinch in Star Trek’s past, underlining Burnham’s transgression just when we viewers should be feeling that warm sense of nostalgia for a classic Star Trek trope.

The Vulcan nerve pinch is a technique used by Vulcans to render  someone unconscious by pinching a pressure at the base of the victims neck. It is accomplished by projecting telepathic energy from their fingertips to a nerve cluster in the neck to cause unconsciousness.

The book The Making of Star Trek by Stephen E. Whitfield and Gene Roddenberry offers a simple explanation: the pinch blocks blood and nerve responses from reaching the brain, leading to unconsciousness. How this might lead to instantaneous unconsciousness is not explained. (We must suspend our belief for a hot minute)  In the earliest of Star Trek reference books, the pinch is referred to as the “Spock Pinch, named after Michael’s foster brother. (But you knew that)

The first non-Vulcan to use the “Spock Pinch” was Khan Noonien Singh, later followed by others such as the android Data, the Changeling Odo, Voyager’s  holographic Doctor, and the humans Jean-Luc Picard, Seven of Nine, and Jonathan Archer (though Archer was carrying the katra of the ancient Vulcan Surak at the time).

The nerve pinch has been used on Vulcans and the Vulcanoid Romulans several times, showing that neither race is immune to the technique.

It’s been mentioned that Burnham did not use the nerve pinch correctly because Captain Georgiou recovered quickly. The maneuver is famously difficult for non-Vulcans. As far as I know, there is no set time a person is supposed to remain unconscious. The fact that it did incapacitate the captain tells me it was done effectively. How long you stay out may be determined by the individual.

Links to the info….